I know I am a little bit too late with this tutorial, Christmas is just around the corner, but it is better now than never. Actually this kind of decoration can be used for many occasions – Valentine’s day for example, or a birthday party!

Turn the work and join the yarn in first sc working ch1, sc in same st as ch1, sc in each of next 2sc, turn

Repeat Row 11 two times more to shape the second half of the heart. Fasten off.

Make two.
Put both hearts together and work evenly sc around them (doesn’t matter where you start). While you work sc around the hearts try to hide all tails between the stitches. Leave 1 inch long space (don’t cut the year, you will have to close it later), and using this space fill the heart with cotton.

When it is done, work sc till the end to close the space and fasten off.

Now hide the tail inside the heart, insert the hook as shown in next photo, yarn over and pull it inside.

I would suggest you to make as many hearts as you need and then continue with felting. I made six hearts.
Felting:
One way to felt is to machine wash in hot water, adding towels to the wash for added friction. I don’t suggest to do it with these hearts as in this case the result will be unpredictable and you don’t know which shape your hearts will have when you get them out of machine. That’s why I suggest hand felting.
STEP 1
Prepare a bowl of hot, soapy water – washing up liquid is perfect! Leave all hearts to soak in the water for a few minutes.
STEP 2
Take one heart at a time, hold it between your hands and rub hard to create friction. Dip it in the water time after time and continue rubbing. If you get tired leave it in the water and take a break. Then continue rubbing until the heart gets thick and stitches disappear. You can make as many breaks as you need, just add hot water and some more washing up liquid every time. Do it with all hearts. You will see at the end you will need just a few minutes for each one.
STEP 3
When you are happy with the result, rinse the hearts in the clean water. Let them dry.
Stars:
I cut 5 stars from scrapbooking paper. I suggest to paint the star on the wrong side of the paper and then cut it out.

Finishing:
Now cut the strand of yarn as long as your garland should be + 20cm or 8inches to make the loops at both ends to hang your garland. I decided to make my garland 1.5m long, so I cut 1.70m long strand. Thread the needle with the strand you just cut. Take a heart and draw the strand through the heart as shown in the picture below.

Leave 10cm long tail (to shape a loop later), and work a stitch on your heart to fix it where it is and to prevent it from moving. Make it twice.

Do it with all hearts leaving between them equal spaces (think that in the middle of each space you will have to attach the star, or whatever you want). Also on another end leave 10cm long strand to shape a loop.
Take a star, in the center put glue (very little) and put on it the strand (take care about distances between the hearts, they should be equal) and cover it with small piece of paper.

Actually later I realized that it would have been better to cover it with exactly the same kind of star, so you would have a beautiful star from both sides, but I left it as it was as I was going to hang it on the wall anyway.

Repeat it with all stars.
Now the last thing you should do is it to shape the loops on both ends of your garland. Thread the needle with one end, draw it through the heart (at the same point where the end was coming out), shape the loop, and work twice a stitch at the same point to fix it. Then draw remaining tail through your heart and cut it. I hope this makes sense and here are the photos how I did it. Make the same with second end.

Well, I hope you will enjoy making this garland and Happy Holidays! 🙂 Other tutorials coming soon! Stay tuned. 🙂

Hello! I am a designer behind Mon Petit Violon brand. In this little space of mine I share unique, beautiful and inspiring projects and patterns. I am an author and recently my first book "Super Cute crochet for Little Feet" was released in UK, Germany, France, Estonia an other countries! US version is coming out in March. I was born in Riga, Latvia, but currently living in Italy with my husband and our two kids. I truly believe that crochet (and other crafts as well) make the world a better place!

This site uses Akismet to reduce spam. Learn how your comment data is processed. 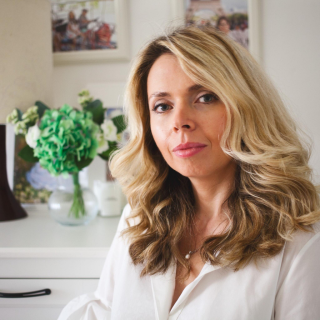 Hello! I am a designer behind Mon Petit Violon brand. In this little space of mine I share unique, beautiful and inspiring projects and patterns. I am an author and recently my first book "Super Cute crochet for Little Feet" was released in US, UK, Germany, France, Estonia an other countries. I was born in Riga, Latvia, but currently living in Italy with my husband and our two kids. I truly believe that crochet (and other crafts as well) make the world a better place!

monpetitviolondesigns@yahoo.com
If you have any questions, or requests, please write to my email!

Buy my patterns on

Happy New Year! I hope for and wish everyone a gre

Merry Christmas, everyone! I was planning to relea

Are you ready for Christmas? I planned so many thi

Some recently made garments (patterns available on

I know many of you will be busy with the patterns

My book (US edition)

All content is copyrighted and owned by Vita Apala (Mon Petit Violon Designs) unless otherwise stated. If you use any of my images on your website please provide the original source. Though you can sell items made from my patterns, it is strictly forbidden to use my images for advertising.